Blog #2: After viewing the website for Effective Altruism, having discussions in class today, and rereading Southan’s essay, “Is it OK to make art?,” I made some new connections and observations. First, I noticed the specific structure that Southan employs in the essay. Most of his piece is strictly factual with little to no bias. The first part of the essay starts with information about the Effective Altruists and what they do. I did not notice that he barely included his own opinions about art within the essay. Almost the entire essay included all that EAs believe, while Southan inserted some pieces about his personal life. Secondly, I noticed a claim that Southan, but really the EAs made, that I now disagree with. Michael Bitton states that “nothing is sacred.” After reading through the essay and discussing it in class, I realized that I do not agree with this philosophy. Wouldn’t the “good” that Bitton, as an EA, does in the world and the impact he has on others be considered “sacred?” Initially, I agreed with this statement because I looked at it as the concept of art. Now, looking at this idea, I disagree. There was not much that I needed to decode in this piece. I seemed to have a pretty good understanding of most of the terms. The only thing that I needed clarification on was the definition of “utilitarianism.” When I first read the article, I did not stop to define this term. After reading it again, I decoded it so that I could have a better idea of the meaning of that section. I used “Dictionary.com” to define this term. I found that with this knowledge in mind, I uncovered a major point within Southan’s essay that I did not really grasp before. The process of doing an initial read, discussion in class, deeper research, and second read of the text was very beneficial. It allowed me to find new meaning within the text and connect with it more deeply.

Blog#3: My choice TED Talk is “How Can Public Arts Projects Transform Rough Neighborhoods?” This talk is given by Dre Urhahn and Jeroen Koolhaas. These two men started their project to transform rough neighborhoods into beautiful works of art in Rio. Later, they received a call asking for them to do a project in one of the poorest neighborhoods in the United States, north Philadelphia. Both of these projects allowed for these two men to live in the neighborhood at the time of their projects. This, they said, was almost a better experience than the painting itself. One of the limits of the art discussed in this TED Talk would have to be funding. Urhahn and Koolhaas had great ideas but lacked the funding for the projects in the beginning. There was not a lot of funding and so many questions from people asking about the specifics, like how many people will you need and how much paint will you need. The process, however, was not planned and mapped out. The men wanted to create a spontaneous effect and so they did not have the answers to these questions. Later, they ended up starting a campaign and received $100,000 in donations. Another limit discussed in this talk is time. The projects, both in Rio and Philadelphia, took a lot of time. The men found themselves having to rethink certain aspects of the project due to the amount of space they had to paint in a certain amount of time. Today, some of the projects are still going on. The power of the art, however, certainly outweighed the limits in this TED Talk. One of the powers of the art was the ability to transform these rundown and poor neighborhoods into something bright and colorful. Urhahn and Koolhaas took the neighborhoods that struggled with these kinds of issues and made it their mission to create a vibrant environment. Some of the houses in these neighborhoods were not even finished, and hadn’t planned on being finished if it weren’t for Urhahn, Koolhaas, and their team. In this way, art was used to do “good” for others. Art took something that needed help and transformed it into something amazing. Which, in my opinion, was a charitable act through art that was just as powerful, if not better, than a donation.

Blog #4: After reading and digesting, “Is it OK to make art?,” and watching, “How Can Public Art Projects Transform Rough Neighborhoods?,” I noticed some connections between the two. It also allowed me to create my own opinion about art in this world. I believe that art can do good in this world and that it is, in fact, “ok” to make art. If the right intentions are there, an artist can affect someone or something in a positive way. For example, in the TED Talk, “How Can Public Art Projects Transform Rough Neighborhoods?,” Dre Urhahn and Jeroen Koolhaas work to create colorful art in some of the poorest cities in the world. This gave the citizens in these cities pride in their homes and themselves. In my opinion, this is just as great, if not better, than simply donating some of your income to a cause. This brainstorming activity allowed me to start brainstorming my own ideas and connect them with others. It allowed me to synthesize the information in two texts to create an argument of my own. Before doing the brainstorming activity, I did not realize that these two sources had so many connections. There are several overlapping ideas within both of them that relate to the idea of art doing good in the world. Visually mapping out these connections has allowed me to form my argument and start brainstorming my thesis and main points. 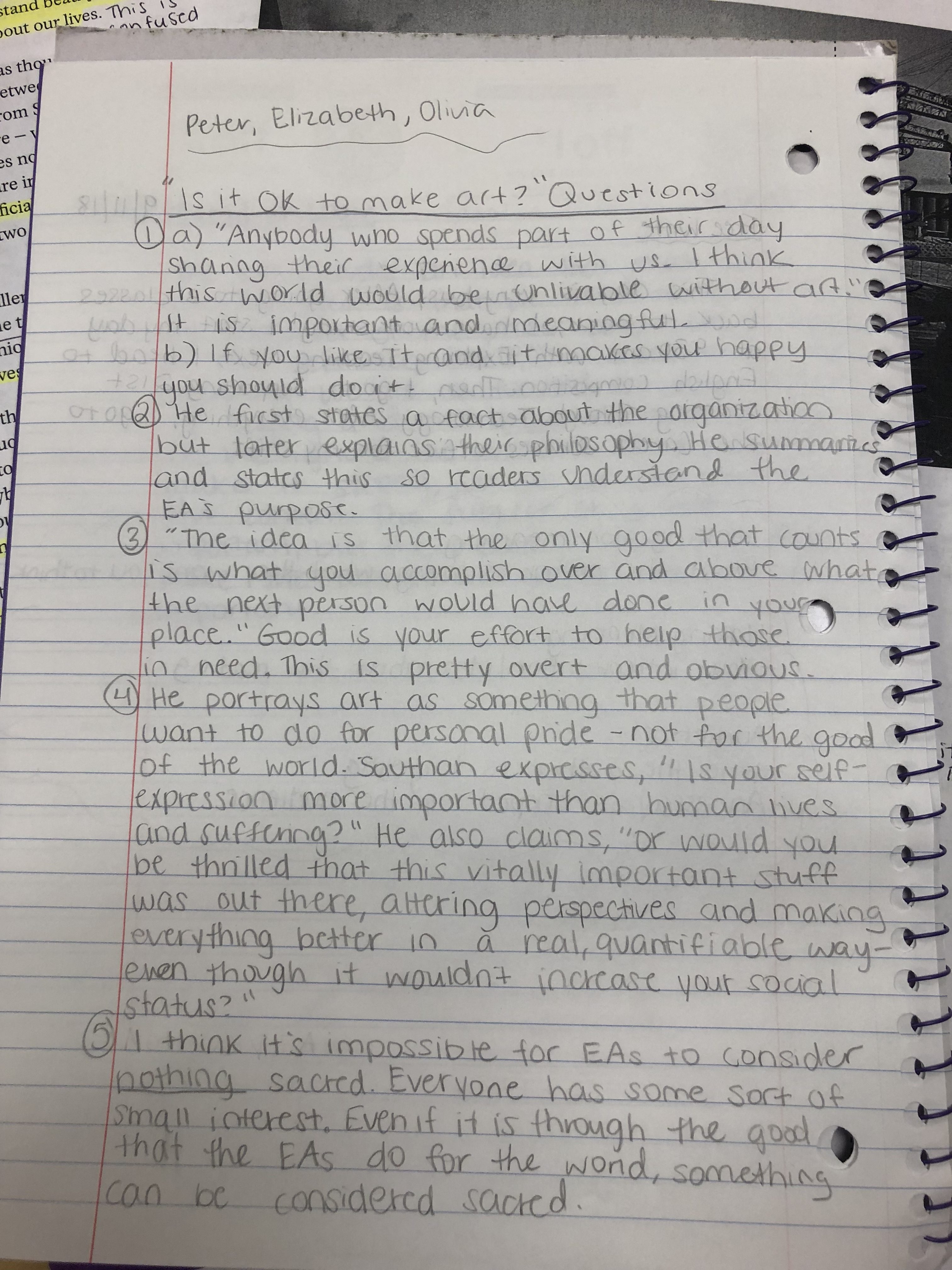