“Freud’s theories are either directly or indirectly concerned with the nature of the unconscious mind. Freud didn’t invent the notion of the unconscious; others before him had suggested that even the supposedly ‘sane’ human mind was conscious and rational only at times, and even then at possibly only one level. But Freud went further, suggesting that the powers motivating men and women are mainly and normally unconscious” (301).

“What the ego and the superego tell us not to do or think is repressed, forced into the unconscious mind. One of Freud’s most important contributions to the study of the psyche, the theory of repression, goes something like this: much of what lies in the unconscious mind has been put there by consciousness, which acts as a censor, driving underground unconscious or conscious thoughts or instincts that it deems unacceptable. Censored materials often involve infantile sexual desires, Freud postulated. Repressed to an unconscious state, they emerge only in disguised forms: in dreams, in language (so-called Freudian slips), in creative activity that may produce art (including literature), and in neurotic behavior” (301-302). 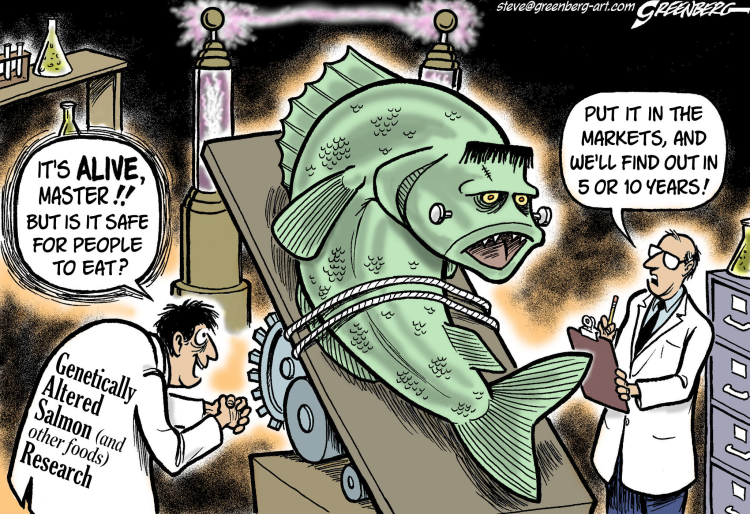 “Steve Greenberg, ‘Frankenfish’ (2009). GMOs (genetically modified organisms) or ‘Franken food’ – food either genetically modified in a lab or grown using hormones, steroids, and other scientific modifications – has been a major source of inspiration for contemporary political cartoons” (252).

“While the animation scene and the developmental events that follow it invite us to compare the Creature’s experience to the trajectory of a rejected or abandoned child, after this accelerated acquisition of linguistic and other skills, the novel’s focus shifts to the question of what to do with a socially problematic and uncontrollable adult” (373).